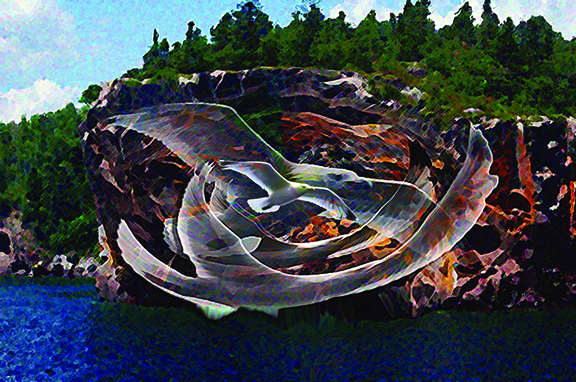 A Good Fall for My Work

Last night, we lit the Channukiah (Menorah) for the third night of Channukah. In about ten days, the Winter Solstice will slip by. Shortly after that, Christmas comes. However, heavy snow and cold weather arrived in my former home of Minnesota, and rain and relatively cold weather settled into my current home of Jerusalem, so I thought it would be a good time to reflect on this (almost past) Autumn’s publications. This has been for me one of the most productive periods of having my work go out into the world–18 poems (counting one coming out at the end of the week, as I write this), 8 digital artworks and one modern midrash. Eighteen is a good number, standing for chai, or life, in gamatria, the Jewish tradition of equating numbers to letters and words. Eight (images) plus one (midrash, an interpretive approach to Biblical text) makes nine, considered also a good number as it’s half of chai. So, it’s all good. It’s been a good Autumn for my publication projects.

I’ve put links below, and hope that readers will follow the links, comment on the publication sites that allow comments, and here, and let me know what you think. Please feel free to share this on your social networks–in fact, I’d very much appreciate your sharing my publications with anybody that you think would be interested.

Eighteen poems published in the Fall of 2012

One poem, coming up in the Winter issue of The River Muse

One poem and one modern midrash in Drash Pit November 30, 2012

Two poems in The Vehicle: A Literary Journal

Completing the circle, beginning where I ended, one poem in The River Muse (formerly The River Journal), October 16, 2012.