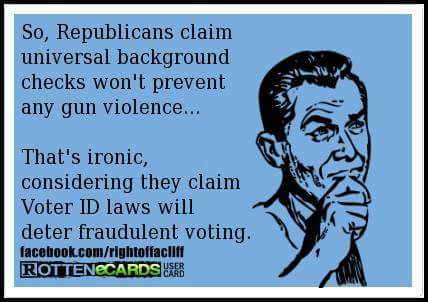 Guns, more guns, the solution is [not] more guns…

An open letter to the elected officials of the United States of America and my fellow citizens, who must vote them out of power for their failure to provide for our safety and security…

I am a citizen of the U.S. and of Israel, where I have lived for the past nine years. I vote in Federal U.S. elections, as is my right by law, while residing in Israel. I am a teacher and a writer. I am writing now not to teach you, but to demand that you govern responsibly, as you have so far failed to do, especially in the matter of preventing gun violence.

“Governments derive their just right to govern from the consent of the governed.”

You are the government by virtue of a social contract. We, as citizens, give you the power to rule over us, to make laws, to enforce laws, and in so doing, we willingly give up some of our own personal rights and liberties. We do this, for the most part, in exchange for your providing for our safety and security.

You have failed your part of the social contract, miserably.

Most noticeably, your bended knee toward BIG GUN AND AMMUNITION has caused you to turn your back on us, the citizens who give you your power to rule.

You seem to think that the power comes from BIG GUN AND AMMUNITION, and certainly recent Supreme Court decisions have given the Corporations more power than they are entitled to, as though it is they whose safety and security matters more than the citizens of the country, as though they are part of the social contract. The contract is between the government and the governed, who are the citizens of the country.

As a result of your wanton disregard of the safety and security of the citizens, you are no longer fit to rule. This is a longstanding principle, going back to the time of tyrants and kings. You are put on notice that the citizens have the right to overthrow your government as a result of your failure to govern.

I call on my fellow citizens to do so through the peaceful process of elections.

If BIG GUN AND AMMUNITION and others of your Corporate Benefactors continue to influence you to bend your knee to them and turn your back on us, be forewarned that the People have the right to cancel the social contract, to take back their rights and privileges, and to toss you out on your asses. And it will not be pretty.

Another shooting…and more outrage pours forth at us, more sadness sinks over us, more debates about what the solution might or might not be, and of course, prayers.

What is the immediate cause of my outrage and this inflammatory letter that both demands that you follow the commitments of governing and threatens to unseat you?

Yet another shooting. I could have written this almost any day in the past few years, according to some calculations.

Another shooter with multiple weapons and large amounts of ammunition has killed many people, despite a questionable record. (Media reports that he left the army after one month and that he graduated from a high school that treats behavior problems, if true, suggest that had reasonable precautions and background checks been in place, he should not have been able to legally purchase 13 guns.)

Another shooting, this one at Umpqua Community College, at another college (or movie theatre or elementary school or wherever someone unleashes rage in fire and lead-brimstone), and more outrage pours forth at us, more sadness sinks over us, more debates about what the solution might or might not be, and of course, prayers.

…why are the rights of BIG GUN AND AMMUNITION to sell indiscriminately more important than the rights of citizens to live in safety and security?

The social media memes claim all sorts of numbers about how many mass shootings this makes for this year, but there have been a lot. Media reports say that the President of the United States has stood at a press podium at least 15 times to report his own sadness at another mass shooting.

The President says, as he’s said again and again, “enough.” Yet, apparently, it is not enough.

Melissa Duclos, a teacher at the Umpqua CC, wrote an open letter to legislators, published in Salon.com. The day of the shooting was her second day teaching. She begins with the realization that she didn’t know the school safety policies for a shooting, and then tells us what she found when she looked them up.

After detailing the first choices, which were not available to her, she ends up with the final choice in the policies, to barricade herself and the students in the classroom and arm herself with whatever classroom supplies she can find to defend against someone with a gun.

“…I am told what to do if that shooter does in fact enter our classroom: ‘There is no one procedure that can be recommended in this situation,’ the manual informs me with grim honesty, before adding, ‘[i]f you must fight, fight to win and survive.’

“Fight to survive. I am a teacher, with a master’s degree in creative writing, and this is part of my job.”

With what should she fight?

Why, whiteboard markers and a stapler, the only classroom supplies in her room. Even if one were to suggest she carry a gun (a bad idea in my opinion), why should it be part of a teacher’s job to be armed and prepared to kill? To “fight to survive”? To shoot other people in order to protect herself and her students? This is why we have become teachers?

This is how the government fails the governed. It does not protect its citizens.

The President says, as he’s said again and again, “enough.” Yet, apparently, it is not enough.

Duclos makes her point about the ridiculousness of her situation, and as two of the images in the slideshow above agree, she says she doesn’t want her elected representatives’ prayers. She wants courage and action.

I hope that most of us want this.

I think, however, that we won’t get courage or action. And that is why we must promise to overthrow the government in the next election.

We will argue about policies and the second amendment (which I have done, arguing it is about a “well-ordered militia”).

We will argue about effectiveness and ineffectiveness of approaches (which I have done, pointing to Israeli gun licensing as relatively effective).

We will quote the overwhelming numbers and take up President Obama’s challenge to compare gun deaths in the U.S. to deaths from terrorism in the U.S., or, as some have done, to U.S. citizens’ deaths due to terrorism anywhere in the world, apparently about 1/1,000th of deaths from guns in just the U.S. (which I have done by sharing the statistics being reported on social media).

If you saw them dressed in black hooded-robes chanting in the street you’d shake your head at the crazy and cross to the other side of the road. But the halls of Congress welcome them with open arms.

And our arguments, our outrage, our righteous indignation will serve BIG GUN AND AMMUNITION and its marketing and lobbying arm, the NRA. All of our arguing will miss the point, because we will focus on mental illness, on Americans’ love of guns, on citizens’ rights and politicians failures, on race and gender, on social and cultural practices, on so many things. All of these things will be factors in the violence, no doubt.

However, they still miss the real reason no action will come about. It is not about us, as citizens or our society. It is about BIG GUN AND AMMUNITION, and more largely, Corporate Feudalism.

The real question is, why are the rights of BIG GUN AND AMMUNITION to sell indiscriminately more important than the rights of citizens to live in safety and security? When did the right to sell death become the basis of the US Constitution or its Bill of Rights?

Let’s admit it, all of the other debates, especially the arguments over second amendment rights, are just a smoke screen and we all, or most of us, should know better—both the citizens and the government.

The People have the power to remove you. And they shall.

The right being protected by BIG GUN AND AMMUNITION and its lobbying and marketing arm, the NRA, along with their bought-and-paid-for politicians and pundits, is unfettered commerce leading to the one right the capitalist system always protects: profits.

Profit and more profit, even while thousands die every year—this is why.

And make no mistake. The mass killings and homicides are good for business.

That’s why the endlessly repeated mantra of the NRA, marketing and lobbying arm of BIG GUN AND AMMUNITION, chants:

But the halls of Congress welcome this grim reaper with open arms.

Guns and more guns, the de facto policy of those in power, does not provide safety and security. It provides just the opposite.

And this violates the social contract of governance. The governed cede power and rights to the government in exchange for protections, especially safety and security. A government that does not uphold this contract—a principle going back to the time of feudal rulers and continuing to the present—loses its privilege to rule and the people are entitled to overthrow such a government, according to the various moral and political philosophies of the social contract.

In the U.S., governments are overthrown by elections.

The only way to respond to the government’s failure to provide the safety and security that someone like Melissa Duclos—the new teacher who wrote eloquently about the need for political courage—and the rest of us deserve, is to vote. Specifically, it is to vote out all of those in office who fail to act or who vote against reasonable measures to ensure our safety and security.

So, my notice to elected officials: be aware. If you continue to fail in your duties, you will be replaced. BIG GUN AND AMMUNITION and its lackey, the NRA, cannot protect you. The People have the power to remove you. And they shall.

“…that we here highly resolve that these dead shall not have died in vain—that this nation, under God, shall have a new birth of freedom—and that government of the people, by the people, for the people, shall not perish from the earth.” —Abraham Lincoln, The Gettysburg Address

from Americans Against the Tea Party (FB)