Behind Closed Doors to Hotel Rooms

Mr. Weinstein Will See You Now
by Amanda Palmer and Jasmine Power

released on BandCamp 23 May 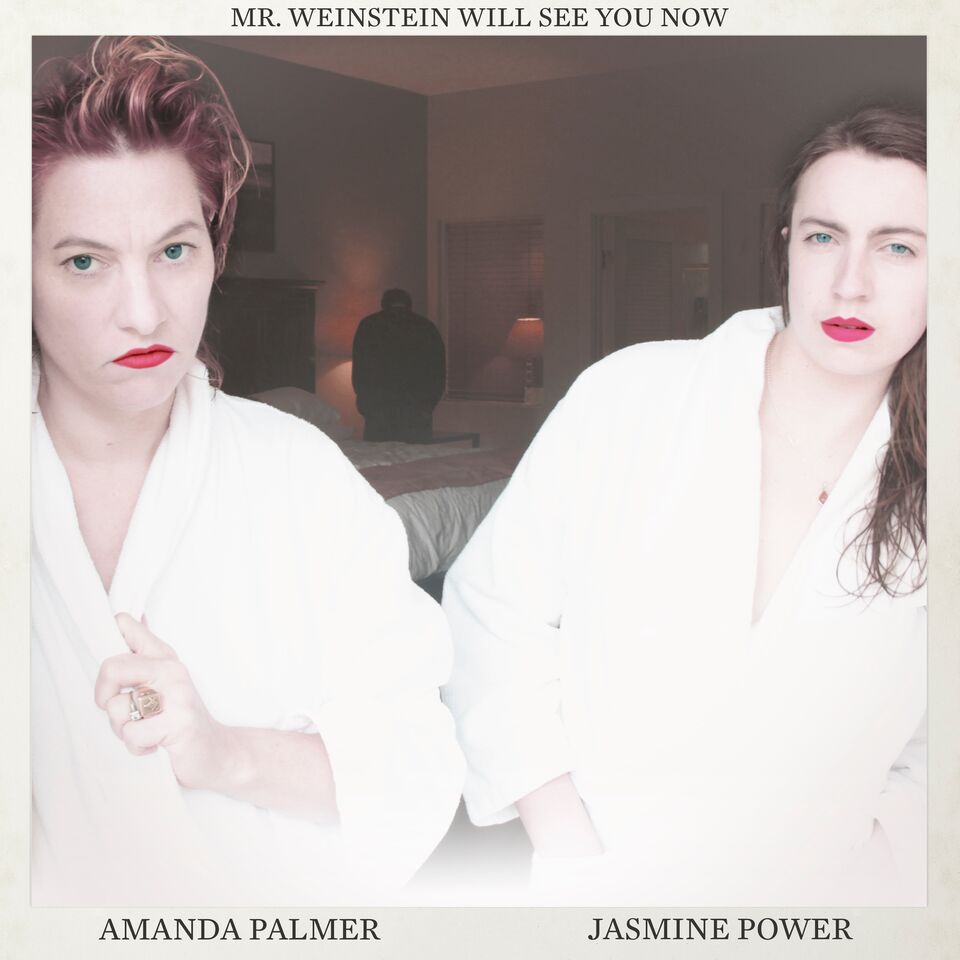 A bit of lyric

amanda:
you came with bows and bells…

jasmine:
i’m not here to have

amanda:
you came here armed for action…
you knew the drill.

jasmine:
move over before i shelve myself
i’m not here to help you.

amanda:
every man behind the curtain

black or blue, you choose
you’re free to be in between
play or lose
you say

Amanda Palmer: The song [Mr. Weinstein Will See You Now] began as a “let’s write something, anything together” jam session between me and Jasmine Power, a 24-year-old Welsh songwriter who happened to be over to a dinner party at my house. She’d been randomly invited over by a mutual Welsh playwright pal of ours, Hywel John. We’d never heard each other’s music, and after bonding over a late-night music-sharing wine-party, we found ourselves in a studio three days later, excited to create something from scratch.

The news about Stormy Daniels was just hitting fever pitch, and I found myself thinking about closed doors to hotel rooms across the world and over time and how they’ve been the backdrops of so many of these painful encounters. That was the starting point, and we wrote with the idea of a split self: two voices inside one woman’s head.

I’m goddam proud of it.

Me: First listen—haunting, almost like ghost voices signing from the memories.

[I meant singing, but, signing—why not?]

Sorry—possibly a vague impression. It takes me a few listens/reads to absorb poetry. This is poetry.

Amanda Palmer: That’s the idea. The lyrics aren’t supposed to be completely audible.

A bit of lyric

amanda:
and this never happened.

jasmine:
i’m the one writing this.

jasmine:
i’m the one writing this.

For me, sexual abuse re-sounds as shattering glass.

Decades ago, I worked as an overnight counselor in a shelter for runaway teens. One night, shattering glass took me into a room. A teen girl held her hand, blood running down it. Broken glass from the window had cut her open as she slammed her reflection in the glass.

She had been praying. She saw herself in the window. She was angry at god and struck herself, her reflected self in the black glass of night.

Am I surprised by #MeToo? No. I saw too many teen girls sexually abused by family members, by fathers—if men did this to their own daughters, why wouldn’t they abuse any woman?

Encounters with teens’ stories—shattered psyches wanting to rebuild a sense of self, running away from what they could no longer live with—these stories forged what I would later call my “street feminism.”

The power of a whisper shocked me into an awakening awareness. It was, perhaps, the most powerful whisper I have ever heard.

Mr. Weinstein Will See you Now

The music uses piano to paint the emotion, the growing power of the singers. As they share their stories, their voices slowly build toward crescendo. Matt Nicholson, a British composer and film-music arranger, brings “strings and orchestration to make the track more cinematic; almost overdoing it at points to kick Hollywood in the face,” Amanda Palmer writes.

At times, the orchestration pulls back to let the voices and piano convey raw emotion:

amanda & jasmine:
just turn me over

amanda:
let’s get this over with

jasmine:
let’s get this over with

Amanda Palmer: I’d been fiddling in my own head for months with ideas for songs and tunes to address the #MeToo movement, and it’s such a hard thing to write about it. It’s so personal to these women, these stories, and it felt too wrong to write something funny and cabaret; the topic is too harrowing.…
It doesn’t sound like anything I’ve ever made before; it’s almost a mini piece of theater.

Me: Disturbing, powerful theater that almost hurts—the beauty of the singers’ voices, the music, combined with the pain and hurt of the reality of sexual violence—“black or blue/ you choose / you’re free to be in between”—but in between is neither here nor there—dissociative—hard to find a self, to cohere.

Until the voices gather the shards, arm themselves, and reclaim their lives:

amanda:
every version has two endings

jasmine:
every time the penny drops

amanda & jasmine:
open casket, open casting
this is where the story stops

jasmine:
i storm out through the hallway
i leave the scars inside
you won’t portray my picture
this film is mine

And at the end of the song, in response to “this never happened,” the song arrives at: “i’m the one writing this.”

Amanda Palmer and Jasmine Power
are “the one[s] writing this”

Amanda Palmer: It’s not surprising that, just like the movement itself, it took two women getting into a room together, comparing notes and joining forces to create something almost like an anthem for taking back our narrative.

Every time I play the track for one of my female friends, we have an important moment together.

I don’t know if most people will even understand this song; and I don’t care.

The women we wrote it for will understand.

Mr. Weinstein Will See You Now

Recorded at Applehead Studios, Woodstock by Chris Bittner, and at The Bunker Studios, NYC, by Todd Carder
Jasmine’s vocals recorded by Owain Jenkins at StudiOwz in Wales-Pembrokeshire in December 2017.
Mixed and Mastered in London by Taz Mattar

An essay I’ve been writing since 1988, and that I read a revised version for the 2016 International Day for the Elimination of Violence Against Women at Verses Against Violence 3, organized by Rachel Stomel in Jerusalem, on 24 November.